Follow-up on tuition fees: What politicians need is a new frame of reference

Over the past few weeks I have had a number of conversations with people coming from various viewpoints on the issue of HE financing. When I have criticised the proposed system I have been challenged in two key areas: How would I propose universities be funded, and Why should taxpayers subsidise universities anyway?

On the question of how to fund higher education, I believe it is a matter of priorities. The government undoubtedly needs to cut expenditure, but has a number of options for doing so. For example, we should prioritise funding universities ahead of replacing the Trident missile system. I would favour full funding for a smaller number of University places, awarded on the basis of merit, over arbitrary targets for the percentage of people starting degrees. Many school-leavers may be better off getting vocational work experience than learning an abstract academic discipline.

There is a broader, more philosophical, question about whether it is fair that taxpayers support a student’s education. One strong argument in response to this is that graduates who benefit financially from their degree (e.g. going into banking, law or medicine) pay higher tax through the existing income tax regime, thereby giving back to the Treasury. This does not apply, however, to graduates whose earnings are in line with or less than non-graduates. In this case, they may be seen to have enjoyed a few years of relative leisure being subsidised by hard-working taxpayers. When described in this way, I realise that this scenario looks unfair. But only with the benefit of hindsight can we know which graduates go on to be financially successful (and pay loads of tax) and which go on to earn relatively little.

The fundamental problem with an increase in tuition fees is that it will affect people’s decisions in a negative way. The tuition fees question is being approached purely from the perspective of economics, when what policy makers need to consider is the psychological effects tuition fees will have. People who ought to go to university won’t. Graduates who ought to explore career paths based on their passions will instead go into low-paying but safe jobs. I sincerely hope that politicians realise this before voting on the issue.
Posted by David R. Clough at 13:46 0 comments

Having found out more details about the proposed system of student loans, some of the conclusions I made in my last post are incorrect. Most importantly, student debts will be written off 30 years after graduation. The majority of students, who graduate in their early twenties, will therefore be paying off debt until their early fifties, rather than into their sixties or seventies as I suggested. This makes things look marginally less bad from the students’ point-of-view. However it is counteracted by the fact that interest is planned to be charged at 3% per annum while a graduate is making re-payments, worse than I had modelled.

From the perspective of Universities, looking for sustainable financing, the fact that a large chunk of student debt will get written-off is not such good news. In my simple financial model a typical graduate still owes c.£15,000 (more than a half of their original loan) when it gets written off at the age of 51.
Posted by David R. Clough at 12:54 0 comments

I have plenty more to write about China, but I couldn’t let this week pass without commenting on the government’s proposal to cap University tuition fees at £9,000 instead of the current £3,290.

I have previously expressed concern that student loans create a damaging cycle of graduate debt, forcing graduates into steady, low-risk jobs. Many graduates are full of entrepreneurial ideas, but the weight of thousands of pounds of debt stifles their ability to take risks by starting their own businesses. It is precisely these kinds of small high-growth companies that the economy requires for long-term growth, as the majority of net new jobs are created by such companies. The existing student loans system has already discouraged one generation from founding innovative start-ups, and the proposed increase tuition fees will make this many times worse.

There is no easy solution to the funding crisis facing Universities. But what struck me this week is just how far the government has got it wrong. I wonder if they have done the sums:

1.) If we take the average graduate starting salary as £25,000 (the figure in c.2009)
2.) Assume a moderate salary upon reaching retirement of £50,000 (in today’s money)
3.) Assume for simplicity that progress between starting and finishing salary is in a straight line

‘Back of the envelope’ method
The average salary over this person’s career is £37,500. They would pay 9% of their earnings above £21,000, which is an average of £1,485 per year. At this rate they would need 18 years to pay off their debt, not including interest, and not accounting for the change in repayments over time.

More detailed calculation
In order to better understand the proposed fee system I have created a simple financial model of the repayments individuals will need to make over time. With the three assumptions above the more accurate ‘time to pay off’ is 27 years, so a 21 year-old graduate would be paying off student debt until they are 48.

If you add a real interest element to the loan, this has a substantial effect on time to pay off, as for several years the repayments do not even cover the interest. Under a 2% real interest scenario, a graduate on a four year course would not be debt free until they are (about) 73...

Note: A correction to the method, though not the message, of this post can be found here
Posted by David R. Clough at 08:56 1 comments

How China reminded me: it's not long till we're history 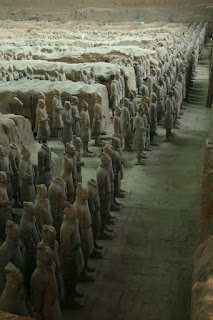 I wrote no blog posts in the month of October on account of taking a holiday in China. It was a great place to be to think about the world and how it’s changing, and it triggered a few ideas.

One of the most remarkable sights in China is the Terracotta Army, which can be found near Xi’an in the centre of the country. Over 8000 sculpted warriors are thought to have been buried alongside the body of Emperor Qin Shi Huang, over 2000 year ago. They were discovered by accident in 1974 by a group of farmers digging a well and have since become one of the most feted tourist attractions in China.

The fact they were discovered so recently is remarkable. It suggests that there could well be other equally amazing archaeological sites still buried underground. Our current technology and resources do not permit an exhaustive search of the planet’s surface – and until they do, we can always look forward to the prospect of amazing discoveries still being out there.

Nowadays our societies are not building anything as grand as the Terracotta Army or the Great Wall of China. But we are leaving behind a wealth of evidence of our existence in warehouses of data, in both physical and electronic form. Future generations will have the (exciting?) task of sifting through the data in order to form a view of what life was like in the 20th and 21st centuries. It is easy for us to assume that the databases and digitally encoded images will still be accessible to future generations, but hard drives corrode and file formats change. The archaeologists in the future could well find themselves dealing as much in microchips as in fossils – and they might unearth some truths about the present day that we ourselves are not aware of!
Posted by David R. Clough at 14:46 1 comments