Alternatives to Growth? Platforms, Modularity and the Circular Economy

The path to hell is paved with good intentions. The best of intentions seem to lie behind a proposal by Montazerhodjat, Weinstock, and Lo that chronically sick people should be able to take out health-contingent loans to finance curative treatments instead of paying repeatedly for short term medicine. The logic behind the suggestion is undeniable: the patient’s financial outcome and health outcomes look better under the hypothetical loan-based model. Just like a renter who prefers to take out a mortgage to buy a home than rent indefinitely, the patient exchanges a perpetual stream of payments for a lump sum of debt that they can eventually pay off. In addition, the loan they propose is contingent on the person’s continued health—if the cure doesn’t work the loan is written off. This aligns the incentives of the pharmaceutical vendor with that of the patient: both want to see the patient permanently cured. In the long-run, if these loans were widely available, more R&D would be directed towards curative medicine rather than temporary or partial treatments. 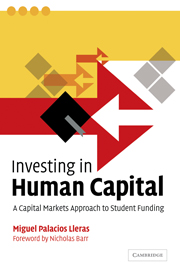 Similar rumblings can be heard in the discussion around financing higher education. The idea of a “human capital contract” is that a prospective student might agree to pay a percentage of their future income in exchange for having their tuition fees paid up front. It is a financial model that replaces the concept of student debt with one of student equity: by sponsoring my university studies you are “buying shares” in my future prospects. The idea is analysed in depth by Miguel Palacios in his 2004 book “Investing in Human Capital.” Palacios rightly points out that there are ethical and practical dilemmas involved. On the ethical side, the concept of equity in a human being has echoes of slavery or indentured servitude, and no matter what guarantees the sponsor makes to preserve the recipients’ freedom, there will be a risk of exploitative or coercive behavior by sponsors to ensure the recipient takes a higher paying job. Also, the idea of indefinite contracts is rather unpalatable. On the practical side, the proposed contracts suffer from severe problems of adverse selection and moral hazard.1 A more palatable half-way house between plain vanilla loans and human capital contracts is the “income-contingent loan,” which you pay back with some percentage of salary over a given threshold. Income-contingent loans typically include a capped repayment period, after which the remaining balance is written off.

The health-contingent loans to pay for medical treatment and the income-contingent loans to pay for education are part of a broader class of “human capital loans,” which are used to build up the intangible value embodied in the person themselves rather than their tangible assets. They also belong to a category I am calling “X-contingent loans” since the amount that gets repaid depends on how future events unfold. As the two examples suggest, X-contingent loans might provide a route to finance things that increase quality of life but which traditional financial products don’t work for. They may be one of the defining financial innovations of the 21st century, which unlock tremendous value for poor people, whose "liquidity constraint" prevents them from accessing healthcare or higher education. They also pose substantial risks, which are not always acknowledged by their proponents. I will highlight two.

First, we consumers are not good at judging the costs and benefits of complicated financial products. The concept of compound interest is not intuitive, meaning we struggle to deal with our long-run finances, even when consumer financial products have deterministic payment profiles. Once you add “contingencies” into the mix, we become pretty hopeless at judging what is a good deal. Corporations have statisticians on staff to compute probabilities of myriad events occurring, and even they were caught out by the correlated decline in house prices that precipitated the financial crisis of 2008. As everyday consumers we have only the coarsest sense of what the future holds; we make decisions based on gut feel, not on probabilities. When it comes to complicated financial products we are easily misled, and even when a vendor is being transparent (the exception, not the rule these days), we tend to make poor choices. When we make poor choices, we lose out, and ultimately markets may fall apart completely.

To emphasize this point, consider two different consumer financial products with “embedded options.” In the US, in contrast to many other developed nations, most mortgages are fixed-rate. However, mortgage borrowers are typically allowed prepay on their loan. If the prevailing interest rates goes down, it becomes attractive to refinance a mortgage at a lower rate. Mortgages have an implicit call-option on the part of the borrower, which creates “prepayment risk” for lender, vastly complicating the valuation of pools of mortgages that make up mortgage-backed securities. Mortgage providers enlarged the level of complexity by issuing mortgages with attractive starting rates, but complicated tiers of future payments (and some mortgage issuers simply engaged in outright fraud). The widespread, correlated defaults on mortgage payments from 2007 were an unforeseen consequence of the products’ complexity. The US market for automotive leasing also has options embedded by law in the leases: at the end of the lease the lessee can decide to either purchase the car at its pre-specified residual value, or to return it to the lessor.2 Monthly lease payments amortize the difference between the purchase price and the residual value, so lessors can offer attractive deals by using optimistic estimates of residual values. In the early 2000s, this market fell into dysfunction because lessors had systematically overestimated the residual values of vehicles, and far more vehicles were returned to lessors than anticipated. Many banks exited the industry, sustaining hundreds of millions of dollars in losses.

The second big problem with X-contingent loans is that prices respond to the quantity of money available to buy something. This is a fairly intuitive result of the forces of demand and supply; when buyers have more money available, this raises the effective level of demand. This is why central banks lower interest rates to stimulate aggregate demand in the economy, but raise interest rates if excess demand is causing inflation. When we consider introducing a form of credit that is specific one particular consumer good, we should expect a high rate of inflation in the prices for that good. The clearest real-life example is (again) the market for property, with the expansion of credit in the form of larger and easier-to-obtain mortgages. The long-run trend to allow people to borrow increasingly larger multiples of their income has sent property prices skyrocketing. This effect is already in evidence in the US market for higher education, in which tuition fees have risen at roughly three times the rate of inflation, hand-in-hand with the expansion of student loans to pay these fees.3 We can clearly anticipate that if health-contingent loans expand the credit available to pay for treatments, their prices (if left unregulated) will likely rise. This is compounded by the highly inelastic demand for health: people will pay for health at whatever price is asked—it is, after all, a matter of life or death.

All this considered, what can we do? My inclination is to treat X-contingent loans very cautiously. We should move forward slowly rather than rush to welcome this tempting looking new market. And we should consider centralized government control. If we compare the situation with student loans in the US and the UK, neither is perfect, but the presence of private student debt in the US makes for a far more dysfunctional system than in the UK, which already runs on income-contingent loans. Mortgages have made home-ownership a realistic possibility for millions, but have also come close to sinking the global financial system. If we can learn from past mistakes, maybe with X-contingent loans we can expand the benefits of access to healthcare and education, in a humanistic rather than an exploitative way.
_________________________________
1 In this context, adverse selection occurs because people who expect to earn a lot in future will prefer to take out loans to finance their education, while people who expect to earn less will opt for HCCs. Moral hazard occurs because a person has a lower incentive to take a higher paying job if some percentage of that extra income gets paid to their sponsor.
2 This example is taken from the academic article "Big Losses in Ecosystem Niches: How Core Firm Decisions Drive Complementary Product Shakeouts" by Lamar Pierce (2009).
3 We should not be surprised that bad actors arise to exploit the system, a story that John Oliver recounts with aplomb.
Posted by David R. Clough at 01:55 0 comments