Learning from our mistakes: a review of Jared Diamond’s book Collapse

I am getting towards the end of a fantastic book: ‘Collapse,’ by Jared Diamond (who is also the author of one of my all-time favourite books, ‘Guns, Germs and Steel.’)

Collapse is both a historical discussion of past societies that have collapsed due to the environmental damage they caused, and a forward-looking discussion of how to utilise what we know about the past to prevent similar things happening in the future. Like ‘Guns, Germs’, Collapse draws upon Diamond’s wealth of knowledge across a wide range of disciplines as diverse as ornithology, anthropology, social psychology and marine biology. It is written with the wise perspective of someone who ‘sits outside of time’ and is able to place today’s problems in the context of what has happened in the past and may happen in the long-term future.

Collapse is primarily concerned with environmental problems. It recounts how the once thriving population of remote Easter Island continued to fell their trees until there were none left. The knock-on effects were devastating for their society, as agriculture failed and the population shrank to a fraction of its former size through starvation and violence. The Anasazi Indians and Greenland Norse perished in a similar way because they failed to anticipate the effects of their mining and farming on the environment. But it is not all bleak tales of failure. Diamond describes several positive stories of proactive response. For example, the Tokugawa shoguns of Japan realised that land was being used unsustainably and instituted wide-ranging laws which successfully reversed the damage.

Diamond analyses the reasons why some societies failed and others survived, and how the decision-making apparatus of various societies proved disastrous or essential for their prosperity. He goes on to relate this analysis to environmental problems today, in a discussion that every government today should make note of.

His writing reminded me of the disastrous way we as a society seem to fail to learn from our mistakes, not just ecological ones but in many walks of life. This year is the hundredth anniversary of the sinking of the Titanic – and yet we still manage to have an unthinkable maritime tragedy, the sinking of the Costa Concordia, caused by navigational error combined with failure to evacuate a ship safely. 2008 saw the collapse of Lehman Brothers, which was directly related to the use of ‘off-balance sheet’ finance mechanisms that should have been prevented following the failure of Enron (for structurally similar reasons) in 2001.

A failure to learn from the past seems to be an all-too-common feature of both historic and modern societies, but in Jared Diamond’s book we have an excellent tool to help us adopt thought-processes and decision-making processes that are more robust and less prone to failure. If every decision-maker was as keen to learn from historical mistakes as Diamond is, the world would be considerably better off.
Posted by David R. Clough at 12:28 0 comments

How Long Before we see the World’s First Trillionaire?

In the news in the UK last week was the latest Sunday Times Rich List, which highlighted the widening gap between the super-rich and the average person. Amongst the one thousand wealthiest British citizens, wealth, on average, rose by 5%. Meanwhile, average incomes are falling. A similar pattern is seen in the US. The growth of wealth among the super-rich is a global phenomenon. And the extremes of wealth are extraordinary: the 5 wealthiest people in the world collectively own $252 billion, equivalent to 10% of the UK’s GDP.

An interesting question, I thought, is how long before we see the first trillionaire? So with a bit of help from Forbes and Wikipedia, I’ve done some research and very simple modelling on the subject.

The first dollar-billionaire was apparently John D. Rockefeller, who made a fortune in the oil industry, surpassing the billion dollar mark in 1916. As of 2012, there are 1,226 billionaires with a collective wealth of over $4.6 trillion. Having examined historical data, the evidence points to an exponential trend in the wealth of the very rich, which shouldn’t surprise us as compound interest and GDP are both (exponential) driving factors.

How might we forecast the year in which the first trillionaire will appear? I’ve taken three simple approaches. The first involves just two data points: Rockefeller’s first billion, occurring in 1916, and the record for individual wealth, set in 1999 by Bill Gates at $101 billion. In 83 years, ‘Max Wealth’ went up two orders of magnitude. To reach a trillion, it only needs to go up one more, so let’s say this takes 41 years from Gates’ 1999 record and we’re left with 2040, i.e. as soon as 28 years’ time.

My second approach is to use compound annual growth on today’s ‘Max Wealth’, which is $69bn belonging to Carlos Slim. Historical rates of growth of the wealth of the billionaires are highly variable, but smoothed ten-year CAGRs range from c.3% to c.9%. Taking the midpoint of 6% as my compound growth rate suggests a trillionaire will appear in c.2058, though of course volatility means it is more likely to happen before this. 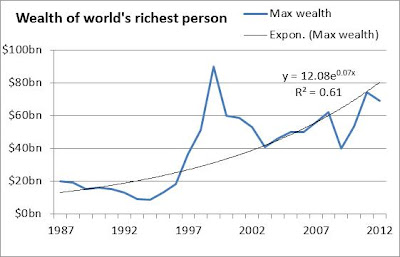 Thirdly, I have run a simple exponential curve-fitting analysis on the data published by Forbes for the world’s richest person over the last 25 years (shown above). Extrapolating the trend this produces into the future suggests the first trillionaire can be expected in 2052, though again volatility will likely bring this forward (and I haven’t tried to model volatility here).

This is just theoretical number-crunching, so can we validate or sense-check these numbers? How about thinking about sources of wealth. Some of the most frequent sources of wealth are natural resource stakes, software and ecommerce, fund management and telecoms. Something these all have in common is ‘scalability’ as I explained in an earlier blogpost. Importantly, most billionaires gained their wealth through the growth and flotation of a large business.

The largest listed companies are now worth several hundred billion and their founders tend to be multi-billionaires, so before we see a trillionaire we will first likely have to see a company with a multi-trillion-dollar valuation, with an individual still owning a substantial stake in it. This is would be eminently possible if the Saudi Arabian National Oil Company ARAMCO ever decided to list. Alternatively, a trillion-dollar company might be the result of pushing a new technological frontier. When this occurs, a company can grow so fast that competition law can’t keep up, and hence it can build a de facto monopoly as Microsoft and Facebook have each done in turn. Each tech boom is generating new companies with higher flotation values, so the first multi-trillion dollar IPO could occur within the next 2 or 3 tech cycles.

Can we conclude anything useful from all this hypothesizing and number-crunching? I have five key observations. The first is that the super-wealthy are likely to get richer faster than the average person, unless something fundamental changes in the way our economies or taxation systems are organised, or a systemic financial disaster/ bout of deflation effectively ‘resets’ the world economy. Second: the world might produce a trillionaire sooner than most people would probably guess, inside of 2 to 3 decades. Third, that traditional macroeconomics does not include the super-rich as a variable, even though the wealth of a few individuals is now comparable to the size of entire economies. Fourth, that the ever swelling wealth of the ‘top 1%’ will structurally change how of the top end of most consumer industries run, as huge buying power is concentrated in a few hands (think luxury apartments, hotels, flights, education). Fifth, that the ‘bottom 99%’ will become increasingly dismayed at the rising disparities – and the sentiment of the Occupy movement will reach the political mainstream across the world.

If you liked this post please leave comments below