Does the future of capitalism lie in Creating Shared Value?

It has been the mainstream view for some time that the primary aim of a business should be to make money. But a recent article in Harvard Business Review has questioned this perspective. And it’s possible it heralds a wider re-thinking of business fundamentals.

In the Jan/Feb 2011 HBR, Michael Porter and Mark Kramer have written a landmark article on “Creating Shared Value,” which they herald as “The Next Evolution in Capitalism.” The main thesis of the piece is that companies have defined markets narrowly in terms of individuals’ conventional economic needs and overlooked broader ‘Societal Needs.’

Societal Needs include the need for a clean environment, a thriving local community, an educated population, and meaningful work. These things, Porter and Kramer argue, have been left up to governments and charities to worry about, or for CSR programs to address, peripheral to a company’s core mission. They point to examples of companies that have taken on some of these societal challenges and generated positive economic benefits from doing so. They encourage every business to redesign its value chain around creating shared value for both the company and society.

As I read the article I was at first sceptical that it represents anything particularly new in business thinking. Indeed, many scholars and activists have spent years lobbying business to take on greater social responsibility. But what this article may represent is shift in perspective within the mainstream. Michael Porter is considered one of the founding fathers of corporate strategy and this high-profile article is a rallying cry for change - one that just might be heeded.
Posted by David R. Clough at 14:26 0 comments

What Ai Weiwei can tell us about the valuation of Facebook 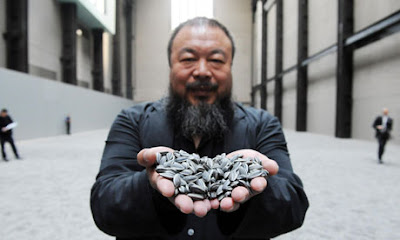 When Goldman Sachs purchased a c.1% stake in Facebook for $500m, the figure that hit the headlines was the $50bn valuation for the whole of Facebook that the sale implies. But is the company really worth that much? Is it really fair to extrapolate from the valuation of a small stake to the fair value of an entire company?
Interestingly, the art world can shed some light on this. There is currently an installation in the Tate Modern by the Chinese artist Ai Weiwei made up of 100 million handmade pottery sunflower seeds. It is an imposing sight, with a mixture of possible symbolic meanings. It could be a commentary on China’s powers of mass production, or the scale of its population and relative insignificance of the individual. It might be a reflection on the power of nature or the beauty of simplicity. It’s probably about something else entirely. Luckily the symbolic meaning of the art is tangential to its relationship with Facebook.

When it was first opened the installation could be walked on by the public. It was later closed off, ostensibly for safety reasons. But with tightened security, it meant it was no longer possible to walk off with a pocket full of pottery sunflower seeds. Given the high profile nature of the installation it was clear that the seeds would become collectors items – and unsurprisingly there have been several seeds changing hands on Ebay. It was reported in the press that a single sunflower seed had been sold at auction for £28. This is where the link to Facebook comes in: If we apply the same valuation calculation to Ai Weiwei’s artwork, the whole work would be worth £2.8 billion, making it the most valuable artwork ever created*.

This valuation is clearly absurd! What it shows, though, is that the laws of supply and demand operate not just for commodities, but for fractional ownership stakes in a larger whole. Where demand to own a stake is high and the supply of stakes for sale is low, the price is naturally bid upwards. In my opinion it is this effect that lead to the high price for a small stake in Facebook. If the whole company were to be sold, for example in an IPO, I would expect a lower valuation than the $50bn+ reported in the press. But while its stock is privately held, the demand for it is so high that it will change hands for inflated prices. Fractional sales are a good way to create the illusion of a high valuation (see also Zynga, Twitter) - but as Ai Weiwei’s sunflower seeds demonstrate, this can’t be taken at ‘Face’ value.

Some recent news stories have added some new perspective to blog posts I wrote in the last year.

In May 2010 I wrote a post complaining about the terrible quality of the 3D visual effects in movies such as ‘Clash of the Titans’ where the decision to make it 3D film was taken at a late stage in the production process. Judging by this FT article on cinema revenues, it seems I was not the only one to be aware of poor 3D quality. My fears over 3D quality made me reticent to see several of the movies in the second half of the year. In my post, I wrote about the risk that studio execs would “kill 3D cinema” before it has been given time to find its place in the media landscape. This is a risk they still need to comprehend: the 3D fad in the 1950s faded into obscurity; it would be a shame to see history repeat itself.

In August I wrote a post discussing the decline of privacy in a socially networked world. Although this controversial issue is far from settled, the News of the World phone-hacking scandal has drawn a clear line in the sand. Celebrities are the leaders and trend-setters of society when it comes to balancing self-promotion with retaining some level of privacy. Through regular interviews, TV programs and paparazzi shoots we get to know the intimate details of many celebrities’ lives and for the most part they put up with it. But the press, in the form of NoTW reporters, have overstepped the boundary and are facing serious consequences, in the form of law suits, job losses, and jail terms. The upshot of this: it is reassuring to know that at some level, our privacy is still sacrosanct.

Finally in June I wrote a post praising the simplicity and sophistication of iPad adverts, which use screen shots of cultural content (e.g. Facebook, The Guardian) to convey the personality of their target consumers (e.g. young tech-savvy trend-setters). In 2011, a new set of iPad adverts can be found around London, with the same concept but different screen-shots. Most notable among this new crop of images is a shot from the website TED. Much like this blog, TED is dedicated to the propagation of interesting ideas. It is a non-profit organisation which videos lectures and performances by some of the world’s top thinkers and talents in a variety of fields. TED talks from the likes of Steve Jobs, Al Gore and Malcolm Gladwell (to name but a few) are free to view online. Historically these kinds of talks would only have been by conference attendees or MBA classes; now they are available to the world. With this advert, Apple have done it again, and given TED Talks a useful leg-up in the process.
Posted by David R. Clough at 13:45 0 comments