Earthquakes vs Automobiles: which to worry about more?

At the time the earthquake, tsunami, and nuclear disaster in Japan began, I was travelling in the US. The images of devastation were horrifying, and the video footage of the wall of water washing away buildings was particularly harrowing. Like many people around the world I have been asking myself ‘what if a disaster like that hit my city?’

Interestingly, much of the media coverage in the US focussed on the nuclear reactors. After the tsunami knocked out their cooling systems, they began overheating and several explosions and significant radioactive leakage followed. (As I write this, the efforts to stabilise the reactors are ongoing and the extent of the radiation pollution is unclear.) The American newspapers were speculating over whether such an event could occur in the US and talkshows were filled with opinion pieces suggesting that nuclear energy should now be phased out.

In my opinion, this focus on the risks posed by nuclear reactors puts a distorted view on the matter. The BBC website published a good article on mis-perception of risk, and why ‘radiation’ is seen as inherently dangerous despite the fact we utilise it safely in everyday life. The fact is, in this tragedy the number of deaths from the earthquake and tsunami greatly outnumbers the casualties from the nuclear disaster (at least, so far). If there is one important message from this it is to prepare for natural disasters, even if they are infrequent. Japan’s high structural standards for buildings prevented the earthquake damage from being much worse; many Pacific rim countries have much more lax standards.

Moreover, the risks posed by natural disasters are orders of magnitude lower than more mundane risks involved in everyday life. Road deaths, of drivers, passengers and pedestrians, greatly outnumber the deaths caused by large scale disasters (E.g., in the US there are c.40k traffic fatalities each year*). While I was in the States, I was reflecting on how their grid-based layout for cities requires pedestrians to cross a great number of roads. And in urban 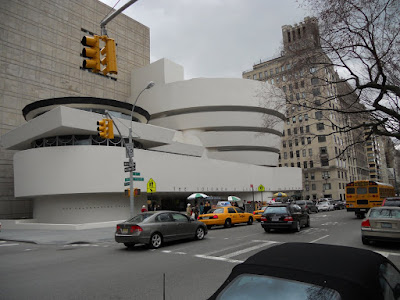 areas such as Manhattan (pictured) there is no distinction between major roads, where cars can drive fast, and minor ones; as a result most cars drive fast most of the time. If pedestrian safety took a higher priority (e.g. by lowering and enforcing speed limits, and pedestrianising city centres) more people might walk rather than drive in US cities making it a win for public health as well as safety.

In the wake of traumatic events it is easy to overreact. However a level-headed approach to assessing risks is critical if we are to make the right decisions to prepare for tomorrow’s emergencies.

Source
*Automobile risks are discussed by Steven Levitt and Stephen Dubner in their book Superfreakonomics, in which they describe Robert McNamara’s efforts to get seat belt use enforced. ”Since 1975, [seat belts] have saved roughly 250,000 lives...at $25 a pop, [they] are one of the most cost-effective lifesaving devices ever invented.”

The Three Routes to Mass Customisation

A major area of innovation in the 20th Century was the development of ‘Mass Production.’ A mixture of technological advances and managerial methods came together to enable the cheap manufacture of consumer products. This enhanced the quality of life throughout the world and had a strong influence on social trends and culture. [A typical Mass Produced product is the McDonald’s cheeseburger; each one is identical and economies of scale make them cheap to produce (further catering analogies will follow!)]

In the 21st Century it looks as though an extension of this trend is occurring, though with a new twist: ‘Mass Customisation.’

Getting products tailored especially for oneself has always been possible for wealthy or powerful individuals, while the majority had to make do with the most basic options. A new set of trends are making it possible to provide everyone with customised products. There are three important routes to mass customisation – and I will mention in turn the progress being made in each.

The first and most obvious route is customised manufacture: the bespoke, ‘one-off’ designed especially for one person. If we think of McDonalds as the archetypal ‘mass-production’ catering service, the Custom-Made foodservice would be a Wedding Caterer. The buyer gets to be creative and individualistic in what they order, and no two end products are quite alike (Bespoke suits and medical implants are two further examples.) Traditionally, Custom-Made meant ‘more expensive,’ however a recent Economist article on 3D printing highlighted the advancement of this revolutionary technology. The game-changing attribute of 3D printing is that making every product slightly different has zero impact on the cost of manufacturing. If the cost of this production method decreases to make it competitive with traditional methods (which The Economist suggests is already happening) then Custom-Made will become a possibility for everyone*.

The second route to a customised product is not at the manufacturing stage but at the assembly stage. All the components are standardised, but the configuration is selected by the customer. The catering analogy I would use for this is Subway, where you choose a filling, salads and sauce from a pre-defined menu of options. The number of possible permutations is vast, but not infinite (as it is with customised manufacture). This route is also used by Dell computers, who gained a valuable edge on their competitors by using an ‘Assemble-to-order’ business model, thus reducing the costs of obsolescence and increasing customer satisfaction. This method of customising products is a relatively recent phenomenon and still has a long way to run.

Thirdly, customisation can happen at the point of use. From a manufacturers’ point of view this has the advantage that they can turn out standardised products, and leave the cost of customisation up to the customer. The relevant catering illustration of this would be a buffet restaurant: the kitchen churns out lots of dishes and every diner can then ‘design’ the meal they want from the options available. The product that is consumed (the food chosen on the plate) is uniquely tailored to the particular customer, but the customisation has been done by the customer and not the restaurant. In the pre-digital era, there were not many products falling into this category. However digital devices such as personal computers, smartphones, and tablets are all highly customisable; their capabilities depend strongly on the software that is loaded on them. From a user’s point of view, an iPhone is tailored to their specific requirements, by virtue of the apps they have installed - this is a strong part of their appeal. But Apple has not borne the costs of this customisation.

Developments at these three stages – Manufacture, Assembly and Use – are allowing much greater choice at much reduced cost. As a result, Mass Customisation is a trend that could come to define the 21st century.

Note
*As for bespoke clothing, this is already within economic reach of the majority of the Western population. As I discovered in Shanghai, a good custom-made shirt can be bought for c.£10 and a suit for c.£70. I believe that all it will take to bring bespoke clothing to the British high-street is an entrepreneur with the right approach.
Posted by David R. Clough at 11:02 0 comments