Value Creation and Value Capture: An Introduction and Simple Framework

The shift towards a digital, platform-based economy has major implications for how value is created in the economy and who captures that value. In my writing I regularly invoke these two concepts—value creation and value capture—but I realize that not everyone will be familiar with them.1 The concepts are well defined and are taught in many business schools. However, to newcomers to the field the terms might seem rather opaque. Given how central they are to thinking about economics, strategy, and entrepreneurship, I am writing this blog post to introduce the two concepts and offer a simple 2-by-2 framework that illustrates how I think about the relationship between the concepts and the distinctive domains of economics, entrepreneurship, and strategy.

When we say that economic activity creates value, the “value” we are referring to is the sum of the benefits that flow to all the participants in the system. The “benefits” here are subjective and are sometimes referred to as “utility.” Economic transactions between buyers and sellers shed light on some of these benefits, but not all of it. When a consumer buys a product, we can infer that the consumer’s “willingness-to-pay” for the product (i.e. the utility they derive from it) is higher than the price they paid for the product—if it wasn’t, they wouldn’t have bought it!

If value creation is about determining the size of the pie, then value capture is about determining how the pie is divided. The price system is central to defining who captures value from a given economic transaction. When a consumer purchases a good, their value capture is defined as the difference between their willingness-to-pay and the price they paid (i.e. if they buy something they value a lot at a low price—hurray, a bargain!—they get more value capture). The seller’s value capture from the transaction will equal the price received minus some measure of the costs that went into providing the good (measuring those costs becomes complicated quickly, so I’ll set it aside in this blog post). Key here is that as long as the price is less than the buyer’s willingness-to-pay, the price doesn’t affect the total value created, it just affects the how much value is captured by each participant in the transaction.

Are these just different labels for concepts I already know?

Drawing a conceptual distinction between value creation and value capture is surprisingly useful. In some economic activities, value creation and value capture are tightly coupled. For example, if I run bakery, I create value when I make a cupcake for a customer; I capture value when the customer pays me for the cupcake. However, in many important economic activities there is either a weak link—or no inherent link—between value creation and value capture. For example, basic research activity leads to novel scientific breakthroughs; product development activities invent useful new products and services. Both these have potential for enormous value creation. But the route to capture value from those activities is rarely obvious. That is why basic research is often funded by national governments through universities and research institutes: the “positive externalities” created by the new knowledge being widely distributed more than justifies the expenditure of public funds on the basic research.

Research and innovation might create value without capturing it. On the flip side, there is a large set of activities in the economy directed toward capturing value, not creating it. Which activities fall into this set is hotly debated. One unambiguous example would be theft or fraud: illegal activity that simply transfers value from the victim to the fraudster is 100% about value capture (in fact, value creation is generally negative in these instances). A less clear-cut example is intermediation in the financial system. There is a strong argument that active mutual fund managers do not create value (as, on average, they do not outperform the market index) and yet they receive substantial management fees, thus they capture large quantities of value. Relatedly, high-frequency traders capture value by receiving information about large orders to buy or sell stock before other market participants and “front-running” those orders; it is hard to see any value creation in their activities. Critics of modern finance argue that it directs a huge portion of our collective intellectual capabilities towards value capture rather than value creation activities.

Hence, I find it useful to think about value creation and value capture as two separable axes in a two-by-two matrix (see Figure 1).

In conversations with (profit-oriented) founders about their business model, I probe both how they will create value and how they will (at some stage) capture some of it. Many entrepreneurs fixate on one or the other. Focusing narrowly on value creation may be a good starting point for a venture but scaling up the value creation takes resources (people, dollars, etc.) and those resource providers need to get something in return. Focusing narrowly on value capture leads some entrepreneurs to be overly cautious about discussing their ideas for fear they will be stolen.

As you can tell, I could write at greater length on the interplay between value creation and value capture (and maybe in later blog posts I will!). I hope this acts as a helpful primer on two core concepts at the heart of entrepreneurial strategy. If more people comprehend the distinction, my hope is that more effort will be directed toward value creation, and less energy will be expended in the lower right quadrant where many talented people spend their days playing value capture games.

My strong recommendation for reading more on this topic is Brandenburger and Nalebuff’s 1996 book Co-opetition. For a scholarly introduction to value-based strategy, see Brandenburger and Stuart’s article, “Value-Based Business Strategy.” If you are new to my blog, some related blog posts are here, here, and here.

1 My co-author Andy Wu and I recently published a Dialogue paper in the Academy of Management Review on the topic of AI and data-driven learning by platforms. Value capture is a central topic in that piece, so this blog post functions partly as a primer to that paper, and a complement to my other writings on value capture.

2 In the latter part of this blog post I suggest that economics focuses on value capture. This is true of the assumptions that economists make about the actors in their models. But economists themselves also study whether policy interventions (such as taxes, subsidies, or regulations) can improve overall value created, i.e. social welfare. Economists care about value creation! They just assume that everyone else only cares about value capture.

3 One could straightforwardly extend the matrix to a 3-by-2 where negative value creation (i.e. value destruction) is a new row in the Figure or a 3-by-3 where negative value capture (i.e. value subsidization) is a new column. Subsidization is an important element in platform strategy as it is often used to catalyze the adoption of new platforms and is sometimes also needed in the long run to retain the most valued side of platform joiners in a multi-sided market. 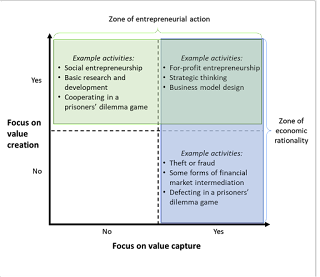